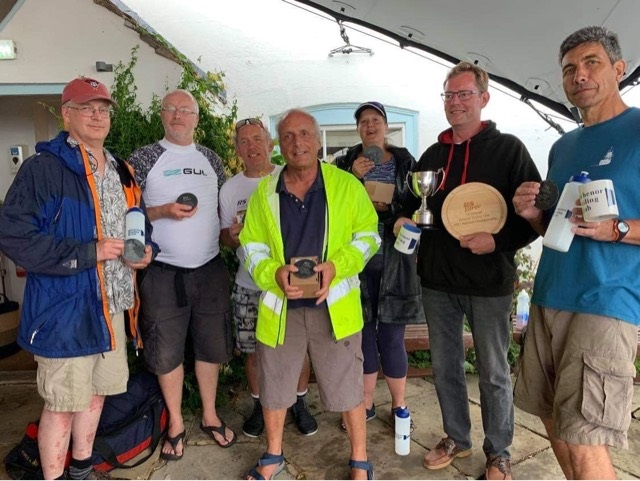 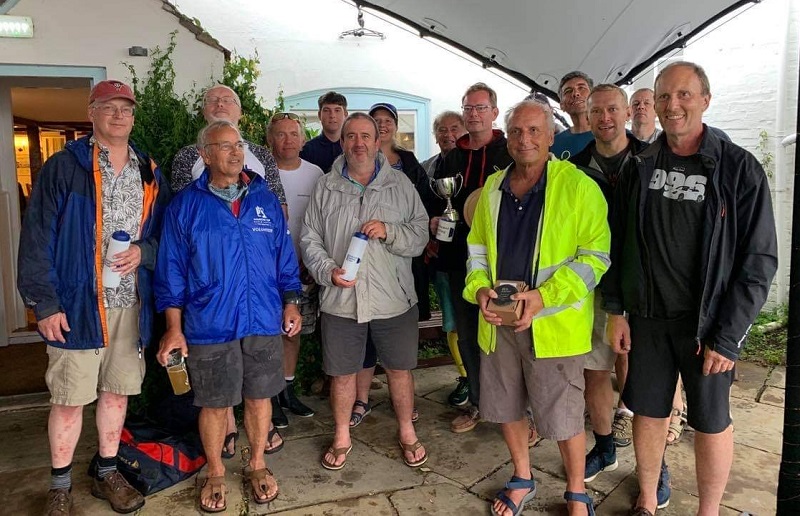 Thank you to Itchenor Sailing Club for hosting a marvellous event.

Thank you to our sponsor Noble Marine.

And thank you to you the RS Vareo sailors for making it a smashing championship!

With tides close to Springs and the three days of racing pretty much straddling high water this event was always destined to be affected by the flow of water to, from and over the race courses.  And so it was!

Friday saw the promised stiff Easterly give us a good push down towards the race area between the Peacock and Wear marks in Chichester Harbour.  Race Officer Celia and her brilliant team set our favourite windward leeward course with the windward mark in an “interesting” position close to the bank and just a little up from one of the channel marker poles.  This was to be scene of much chaos and carnage during the afternoon’s three races for the 14 competitors who arrived for the first day.

Race one was hotly contested across the fleet as the sailors came to terms with the wind and tide conditions.  Cheryl Wood got off to a good start in her favourite conditions but traded the lead with Richard Woods and Nick Crickmore before Luke Fisher fought to the front in the final lap to take the win from Cheryl then Nick.  There were plenty of swims and blow overs during the race including a particularly cruel capsize for Howard Astley-Jones at the final leeward mark causing quite a traffic jam behind.

Sailing in a borrowed boat, ISC sailing manager Ryan Breach found problems with the spinlock meant he struggled to use the kite in race one.  Spotting a shift in the wind he made a brilliant port end flyer start in race two to cross the fleet and lead for much of the race.  However Luke was getting into his stride and took the lead on the last lap with Alan Bassett finding his form to pip Ryan into second.  Again more swims and at one point two turtled boats made an interesting gate to the windward mark.

With the tide now ebbing strongly the approach to the windward mark was very tricky in race three.  It was a case of needing to sail close to the shore to be able to tack and lay the mark whilst making a calculated guess on how close you could get before going aground!  This coupled with the wind really gusting caused a complete car park of boats in irons or capsized at several points in the race.  Once again, sailing superbly Luke took the win from Richard Woods, closely followed by Howard.

As usual there was plenty of great racing throughout the fleet including Steve Barron in his first RS Vareo event in close competition with Martin Dyer, and just behind Mike Dicker and Roshan Verghese (also sailing a borrowed boat).

With the racing over it was a long slog back to Itchenor against the wind and tide where thankfully the wonderful RS Vareo support team were ready to meet us with a couple of gallon jugs of beer.

A light Southerly breeze along with the incoming tide meant a long trip to the race area a bit further down the harbour along with the Hadron H2s who were sharing our start line for their Open meeting.  Eventually we arrived (with the aid of a few tows for the back of the fleet) and our Race Officer for the weekend, George, set a course in pretty much the opposite direction to Friday.

In race four with the tide still flooding the fleet headed left into the shallows while Paul North decided to try the clear air and stronger pressure in the channel.  As expected (by everyone else) this did not go well and the strong current pushed him back into the lower half of the fleet at the turn.

Laying the windward mark required really good judgement in the light conditions, which Nick showed all weekend, but good downwind legs from Luke and Chris Abbott saw them take 1,2 with Nick in third.

With race five pretty much taking place over the turn of the tide the course opened up much more, only for the wind to all but disappear on the last downwind leg.  With some of the fleet trying down the middle without the kite as the wind filled in from the back there was much changing of tactics as the fleet was telescoped down onto the leeward mark with 5 or 6 places being won or lost in the last 50m.  In the end Richard took the win from Luke followed by Chris.

With most of the fleet wondering if our racing was over with the becalming at the end of the last race, nature came up trumps with a sudden strong blow giving the best conditions of the day.  After some slight trepidation when a mini motor cruiser decided to trundle through the start line with about 40 seconds to go the fleet of 17 headed upwind in close formation apart from Ryan who once again spotted the shift and executed the perfect port end flyer.  Likewise, the downwind leg was a great sight with the 17 kites flying and some close fought mark roundings.  In fact we had moved so fast that as we approached the start line the Hadron start had to be cancelled as we came through in their last minute.  Our arrival was also met with whistles that the upwind mark had moved following a significant shift.  Again Luke showed his class leading from start to finish followed by Nick, with Howard keeping ahead of Paul for third.

With the wind now in the South West we all popped up the kites and had a fabulous sail up the harbour.  I was grinning from ear to ear and knew exactly why I sail the RS Vareo.  However, on reaching the moorings leading up to Itchenor the wind dropped and the approach was close hauled against a very strong ebb.  It required sailing about 300m past the slipway then ducking and diving though the moorings to make a safe landing.  Thankfully those gallon beer jugs reappeared at just the right moment.

Most of the fleet enjoyed a great fish and chip supper in the clubhouse and headed to bed well aware of the following day’s forecast of even lighter winds and rain.  With a long trek back to Torquay Jim Short decided that enough was enough and made an exit, posting on Facebook “I had a great time and learnt a lot.  Great to meet you all and hopefully meet again soon” - ‘nuff said.

At Race Officer George’s 0930hrs briefing on Sunday morning the wind was 6 kts Southerly, not the forecast of 6-8 kts Northerly.  A quick canvass of opinion showed a willingness to get out and sail and the fleet left early hoping to be able to make an 1100hrs start.  In the end the final stragglers were towed up about 1130hrs into just about no wind at all and two very heavy showers.   A decision was made to give it an hour and after 55 minutes of floating about listening to the curlews and oyster catchers some breeze began to fill in from the North.

It was a close beat with little separating the fleet at the windward mark, then the wind dropped!  Cheryl found some pressure down the left side and was soon followed by Luke.  Almost everyone else picked up little flutters here and there but it was painful, and as Howard remarked, turned into a bit of a lottery.  Eventually Luke crossed the line first, but was judged OCS at the start, so Chris took the win followed by Cheryl and Nick

Another long sail back against the tide with the wind dying ended with either the need to pump to get home for the early arrivals or a tow in for those coming at the end.  Thankfully the Spring tide meant that the water was close to the top of the slip.  Unfortunately Paul found out on exiting his boat that it was a very deep gap between the two slips!

So, with a fine performance in a variety of conditions Luke Fisher is once again a very worthy RS Vareo National Champion.  I must record here that not only is he a great sailor but he is incredibly generous with his advice and guidance right across the fleet.

Nick was second and also took the Master trophy, with Richard in third and also taking the Grand Master.  Chris was fourth and Cheryl was First Lady.

The Apprentice trophy for best performance outside the main prizes by someone at their first Nationals went to Howard.

The Fidelis trophy, awarded to the highest placed person outside the main prizes who has sailed in at least three RS Vareo Nationals before, was won by Alan Bassett.

As usual everyone in the RS Vareo fleet gets a prize so everyone else took home an ISC water bottle.

Thank you very much to Itchenor SC for hosting us to a super event.  Thank you also to Noble Marine for continuing to generously sponsor our class.