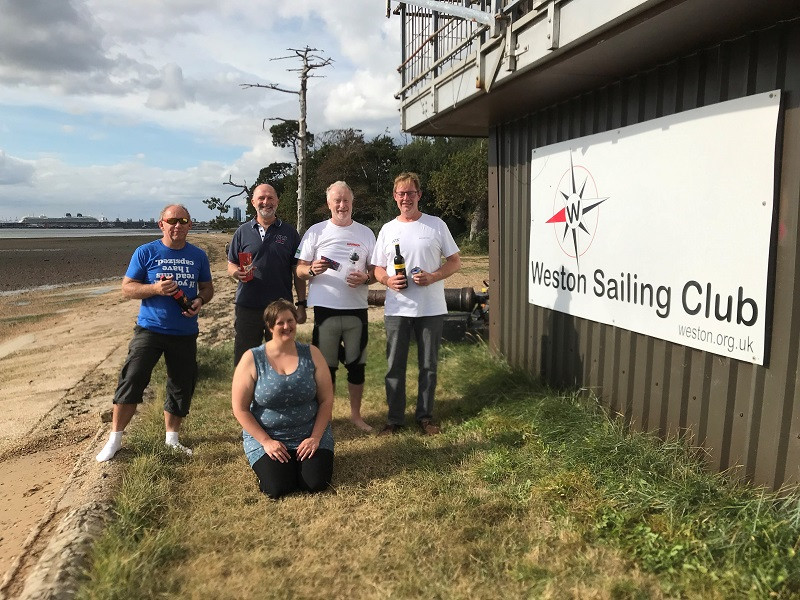 With other events going on over the same weekend, just 5 RS Vareos travelled to Weston Sailing Club, defying the prediction of a light wind forecast, for what turned out to be some of the best champagne sailing conditions on the Saturday we’ve had in recent years.

Everybody travelled down on Friday afternoon/evening ready for what was scheduled to be a 10am start on Saturday to suit the tides.  Chris “River Boy” Abbott decided that one trip from Nottingham wasn’t enough so “popped back home” overnight and was raring to go with the rest of us after just two hours sleep.

It turned out that two of the big fleets at Weston were away for their own Open meetings so race officer John offered the RS Vareos a joint third start with the slow handicap fleet but with our own windward leeward course, keeping everyone happy.

As the designated start time approached, the wind didn’t bother to show up so John put up a 30 minute delay.  It was a glorious sunny, warm day and the locals were muttering about a sea breeze coming later, we kept our fingers crossed.  At 10.30am a gentle but steady South Westerly allowed us to get under way.  Luke Fisher and Chris led the way with Cheryl Wood, Alan Bassett and Paul North trying to find some air to get to the windward mark.  However, as each of the three laps passed the wind notched up another Beaufort force so by the end a solid force 3 was blowing.  Due to some quirk (that I never did understand), unusually we raced clockwise around the course leaving the marks to starboard.  This particularly confused Paul who on the last lap tacked at the mark right in front of Chris.  To add insult to injury he tried to do his penalty turn just as the wake from something very big on Southampton Water arrived and the resulting capsize confirmed his drop from second to fifth, following Luke, Chris, Cheryl and Alan.

Race two had a completely different kind of start, in truly fabulous conditions and a good 3-4 still coming from the South West.  Wind against tide gave a choppy beat but once round the mark and with the kites hoisted the RS Vareos flew downwind, with just the occasional moment of scaring some rowing crews waiting to compete on the edge of the race area.  Race two result same as race one.

In race three Alan found his form leading from the start and holding out until the last lap before being passed by Luke for his third bullet, with Cheryl in third place.

It was all over by 2pm so some sitting in the boat park with a beer or two soaking up the sun seemed a sensible way to spend the afternoon before eventually repairing to a local pub for dinner.

Sunday’s forecast was the same as Saturday’s but a little more cloud cover and a hint of rain.  In the end it was another lovely day but the hazy cloud stopped Southampton heating up and no sea breeze – pity.

In a very light North Westerly the course was reversed and thankfully sailed leaving the marks to port.  Three very long races ensued with the RS Vareos trying to duck into the edge to avoid the tide upwind and find just enough downwind to keep the kites filled – mostly.  Chris found a way to get ahead of Luke in race one and hold on for the win but wasn’t able to repeat in five and six.  It was one of those days where at the back of the fleet if you put in one more dodgy tack at the windward mark the boat in front was suddenly 300 yards down the road (speaking from bitter experience).

In the end it was close at the bottom with just three points between 3rd and 5th but Luke with a perfect five points once again showed his mastery in the RS Vareo in a variety of conditions.

Many thanks to the race and safety teams, Christine in the galley for the drinks and bacon rolls, and to Jeremy for organising keys and access.  Looking forward to next year.